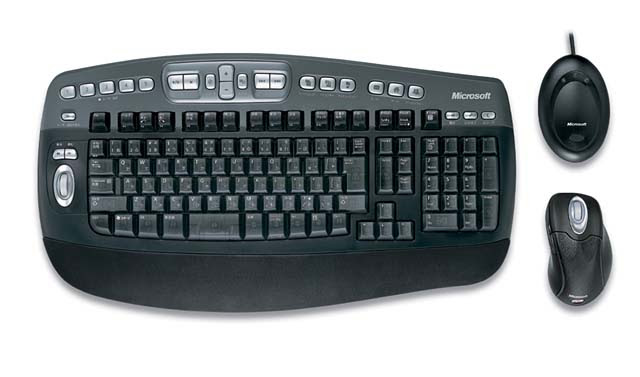 If you’re sick of getting tangled up with cords and wires, Microsoft’s new Wireless Optical Desktop Executive Edition could be the answer you’re looking for.

I got a new kitten just before Christmas and, like most kittens, Neville has a fascination for attacking anything at (her) eye level — ankles, spiders, copies of The Southland Times spread on the floor for leisurely Saturday morning reading and, of course, cords.

This wireless desktop has put an end to the days of my computer mouse suddenly scudding across my desk at a great rate of knots and disappearing.

I’ve had a wireless optical mouse for a while and have found the freedom to mouse anywhere on my desk, great. The only drawback has been the battery-life issue: wireless mice chew through batteries at an astounding rate.

Because my computer gets a lot of use, the batteries were fizzling out every couple of weeks, at best. However, this latest beastie seems to run on the smell of an oily rag.

I’ve been using the same set of batteries for almost two months and, according to the nifty little battery level panel I can call up onscreen, there’s still a lot of juice left in those suckers.

According to Microsoft, you can get up to six months of use out of a set of batteries with this desktop.

The keyboard and mouse will work within 1.8m of the receiver, even if your computer is out of sight, and the Microsoft Smart Receiver tells you if any other wireless devices are interfering with your desktop.
It even tells you when the batteries are getting low.

The ergonomically designed mouse lets you switch between open windows by pushing down on the scroll wheel and has five programmable buttons, incredibly smooth scrolling and tilt wheel technology, which allows side-to-side scrolling.

The keyboard has a cushioned palm rest and at the top you’ll find one-touch hotkeys for popular destinations such as my documents, mail and Messenger, system keys for the calculator, log off and sleep modes, a media centre in the middle set out like a standard CD player and a favourites section, where you can set your own favourite websites for one-key access. Enhanced function keys offer shortcuts for undo, redo and other common tasks and it’s simply a matter of hitting the F Lock key to switch between the normal F keys and the enhanced versions.

The keyboard also has a built in scroll-wheel mouse on the left, again with tilt wheel technology.

And best of all, it looks cool.

← A for ingenuity; F for effectiveness
Surfing for memories →